Our team is dedicated to comprehensive and compassionate care for all patients. While carefully picking our staff, we look for more than superior skills. Here at Frank’s, positive attitudes and a passion for helping others are extremely important. Each member of our team exceeds all of our expectations for incredible patient care. Dr. Hayden H. Franks is a highly skilled dermatologist who has been in private practice for more than 20 years. Specializing in medical dermatology, surgical dermatology, and skin cancer, he began Franks Dermatology with a vision of providing unmatched quality of care. He does this with an experienced and compassionate team, cutting-edge technology, patient education, and hands-on attention to detail.

Born and raised in Magnolia, Arkansas, Dr. Franks has an undeniable love for the Natural State and its people. Dr. Franks volunteers as an attending physician at AHEC Southwest. There, he was selected by the family practice residents to receive the Golden Apple Award in recognition of his outstanding teaching. Recently, he developed a mentor program at his alma mater, Hendrix College, to help pre-med students connect with physicians.

In addition to his leadership in the medical field, Dr. Franks is also very involved in his community. He is a member of Pulaski Heights United Methodist Church and has served on many church committees. As an avid outdoorsman, he is a current member of the Arkansas Game and Fish Foundation Board.

Dr. Franks attended Hendrix College. There, he received a B.A. in Biology and was the president of his class. He is now a current member of the Board of Trustees. After Hendrix College, he went on to earn his medical degree at the University of Arkansas for Medical Sciences (UAMS). After graduation, he completed an internal medicine internship and his dermatology residency at UAMS. In addition to Franks Dermatology in Little Rock, Dr. Franks is also the founding partner of Dermatology Associates, LLP in Texarkana, Texas. 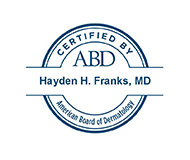 Rachel Sims, RN, handles a wide range of care at Franks Dermatology including the consultation and treatment of cosmetic dermatology patients. With over seven years of experience, Rachel is highly skilled with all cosmetic injectables. Patients benefit from her advanced training and continual education on the safest and most effective products and procedures available. In addition to Botox®, Dysport®, Juvedérm®, and Restylane®, Rachel also administers Kybella®, Sculptra®, Skinpen® microneedling, and dermaplaning. Following a complimentary consultation, patients receive recommendations on a treatment plan tailored to their specific needs.

Born and raised in Conway, Arkansas, Rachel is a current board member of the Arkansas State Board of Nursing. She is a graduate of Ouachita Baptist University with a Bachelor of Science in Dietetics. She also holds a Bachelor of Science in Nursing from the University of Central Arkansas. Rachel was named “Best of the Best” RN by AY Magazine in 2017 and 2018 and was honored by the Cystic Fibrosis Foundation at “Taste of the Finest” in 2018 for her commitment to the organization.

An avid volunteer, Rachel can be found giving her free time to CARTI, American Heart Association, and the Cystic Fibrosis Foundation. She lives an active lifestyle as a runner and enjoys any outdoor activity with her husband, John and two dogs, Ronald and Rosie.